I first got into games back in 2009 when I launched a social game in my free time called League of Heroes on Facebook and Myspace. League of Heroes was one of the highest monetizing games on a per user basis for the time. Further, the game was the very first social game to introduce guild vs. guild mechanics: leagues of heroes fighting other leagues.

Our flagship game at Playviews was a fantasy RPG called Fantasy Quest:

In 2013 I joined FunPlus (a mobile games publisher/developer) as a Studio Head in the Strategy Division and assumed the role of External GM of Vancouver in 2014. The main product I worked on was a mobile “march battle” style game called Kings of Avalon: Dragon Warfare. The game hit #1 Top Grossing on the iOS AppStore in November of 2016 and otherwise generally in top 50-100 grossing.

Since I first entered the mobile gaming space I have now worked on 12 launched mobile titles (not including a bunch of titles that were killed during development). I’ve worked primarily studio/development side but have also worked in marketing for this title:

And publishing for this title:

Prior to gaming, I had a career in management consulting and began my work life as a software developer. For more on my background: www.linkedin.com/in/jokim/ 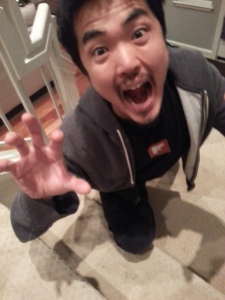